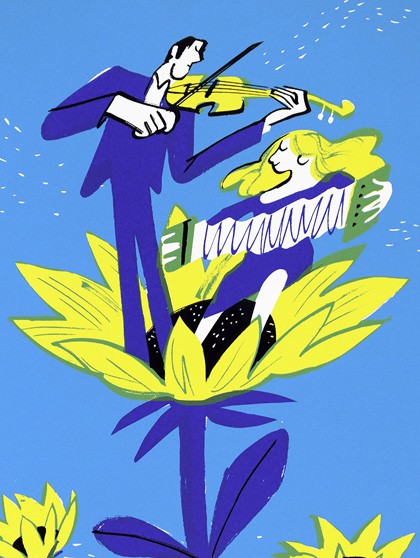 Assuming a moral and social imperative, the CPS edited a silkscreen by João Fazenda in order to raise funds and effectively contribute to helping the growing number of victims of the current war in Ukraine.

The artist joined this cause with a serigraphy of hope entitled “Seeds” which highlights sunflowers, a flower of great symbolism for the Ukrainian people and evokes music as a universal expression of humanity.

The sale of the 200 copies that complete the edition reverts 100% to the Portuguese Red Cross, an institution that is working every day to support displaced people. 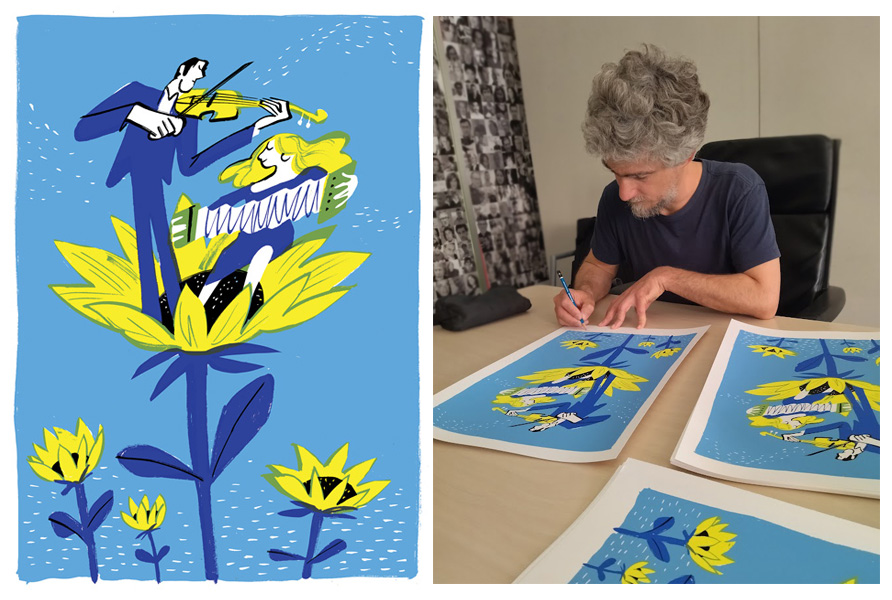 "Seeds" is the title of João Fazenda's solidarity serigraphy whose sales go 100% to support populations affected by conflicts in Ukraine.

According to Ana Jorge, President of the Portuguese Red Cross, “this is a critical moment for Europe, but we recognize the immense generosity of people all over the world who are mobilizing to help. The Red Cross of Ukraine and border countries have already supported more than 3 million people and in Portugal we have surpassed the more than 2 thousand people who, fleeing their country, are looking for a safe place to live here. Water, shelter, food and security continue to be the most pressing needs and monetary donations are the best way for us to be able to provide an effective and sustained response over time to the populations affected by these conflicts. To Centro Português de Serigrafia we express our deep gratitude for joining this cause, through the serigraphy of João Fazenda. We recognize that this is a new form of solidarity, where people support the most vulnerable and enjoy the art and culture that identifies us so well”.

João Prates, Director of the CPS adds: “Given the dramatic anguish that constitutes a war, and the just dignity that constitutes ONE LIFE, I risk being utopianly primary: for me, there would not be a single weapon on top of the Earth. Pure illusion in the light of which a war cannot have victors. The sad moment we are witnessing is a harsh reality experienced by millions of human beings, deserving our solidarity and encouragement.

In its recurrent fraternal spirit, the CPS - Centro Português de Serigrafia promotes this solidarity initiative, in partnership with the Red Cross, an exemplary entity in its noble action on the ground having already provided assistance to several million victims of this war. The proceeds from the serigraphy of the notable artist João Fazenda, who kindly joined this cause and agreed to present a very special value for its acquisition, will be donated in full to the Portuguese Red Cross.

“A Arte Liga- nos” was the previous solidarity action of the CPS to help with the effects of the pandemic. With this new work of art, the motto of approximation is reaffirmed, but also that of respect for others, dialogue, ethics and peace. May the silkscreen be seen and enjoyed as a sign of freedom and all hope, in a festive and musical sunflower, the national flower of Ukraine, which João Fazenda was so good at translating.”

Each silkscreen is numbered and signed by the author and is available at a symbolic price at the CPS Galleries in Lisbon and in our online store for €70 PVP and €50 for CPS Members.

All revenues go to: