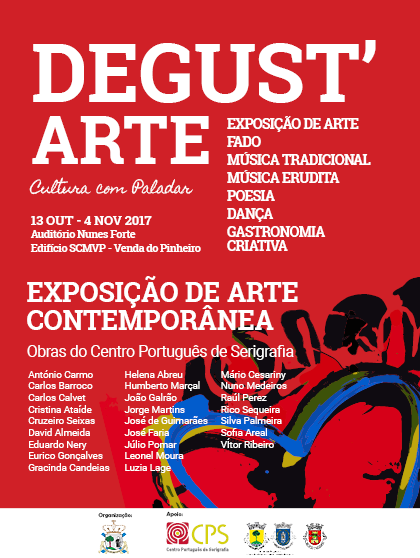 From the 13th of October, the Nunes Forte Auditorium in Venda do Pinheiro hosts a Contemporary Art Exhibition of works edited by the Portuguese Printmaking Center (Centro Português de Serigrafoa), by renowned artists such as Cristina Ataíde, Cruzeiro Seixas, David Almeida, Eduardo Nery, Eurico Gonçalves or José de Guimarães. There are more than two dozen works that affirm the value and creative dynamics of contemporary Portuguese graphic work, which can be seen until the 4th of November. Until this date, CPS will have a New Members Campaign on it's website, with special registration conditions.

The exhibition is part of the event Degust'arte - Culture with Taste, a set of initiatives organized by the Santa Casa da Misericórdia of Venda do Pinheiro, which include themed dinners with the presence of renowned Chefs, such as Chef Filipe Reis, Chakall and the Sushi Chef Ricardo Martins; a show of flavors from the region by local producers, all punctuated by several moments of musical entertainment.