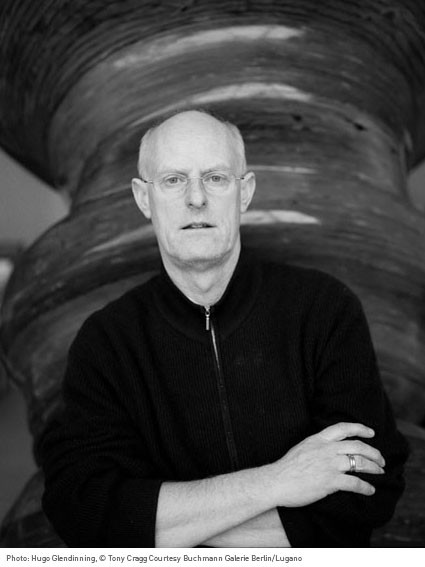 Tony Cragg is one of the world’s most foremost sculptors. Constantly pushing to find new relations between people and the material world, he works with stone, wood, glass, stainless steel, aluminium, cast bronze and cast iron, and found objects, from plastic consumer goods to rubbish from the streets. His early, stacked works present a taxonomical understanding of the world, and he has said that he sees manmade objects as “fossilized keys to a past time which is our present”. So too, the floor and wall arrangements of objects that he started making in the 1980s blur the line between manmade and natural landscapes: they create an outline of something familiar, where the contributing parts relate to the whole. Cragg has always had, from an early age, a passionate interest in science and natural history and worked as a young man as a lab technician at the National Rubber Producers Research Association (1966–68), an experience that is reflected in his vigorous approach to material. He has said, “I see a material or an object as having a balloon of information around it” (1992). For him form and meaning are interdependent, any change in form changes the ‘balloon of information” and vice versa, so that any change in materials also changes meaning and significance. Cragg understands sculpture as a study of how material and material forms affect and form our ideas and emotions.

This is exemplified in the way in which Cragg has worked and reworked two broad bodies of work he calls Early Forms and Rational Beings. The Early Forms explore the possibilities of sculpturally reforming familiar objects such as containers into new and unfamiliar forms producing new emotional responses, relationships and meanings. Rational Beings explore the relationship between two apparently different aesthetic descriptions of the world; the rational, mathematically based formal constructions that go to build up the most complicated of organic forms that we respond to emotionally. The human figure being the prime example of something that looks ultimately organic eliciting emotional responses, while being fundamentally an extremely complicated geometric composition of molecules, cells, organs and processes. Cragg’s work does not imitate nature and what we look like, rather it concerns itself with why we look like we do and why we are as we are.

Tony Cragg was born in Liverpool, UK in 1949 and has lived and worked in Wuppertal, Germany since 1977. He has a BA from Wimbledon School of Art (1973) and an MA from the Royal College of Art (1977). Among many major solo shows he has exhibited at The State Hermitage Museum, St Petersburg, Russia (2016), Benaki Museum, Athens, Greece (2015), Heydar Aliyev Centre, Baku, Azerbaijan (2014), CAFA Museum in Beijing (2012), the Scottish National Gallery, Edinburgh (2011), Tate Gallery Liverpool, UK (2000), Museo Nacional Centro de Arte, Reina Sofia, Madrid (1995), Stedelijk van Abbemuseum, Eindhoven (1991) and Tate Gallery, London (1988). He represented Britain at the 53rd Venice Biennale in 1988 and in the same year was awarded the Turner Prize at the Tate Gallery, London. He has been a Professor at Ecole Nationale Superieure des Beaux Arts, Paris (1999-2009) and Professor at Kunstakademie, Dusseldorf, 2009 – present. He was made a CBE in 2003, elected a Royal Academician in 1994; received the Praemium Imperiale for Sculpture, Tokyo (2007) and he was Awarded the 1st Class Order of Merit of the Federal Republic of Germany (2012).